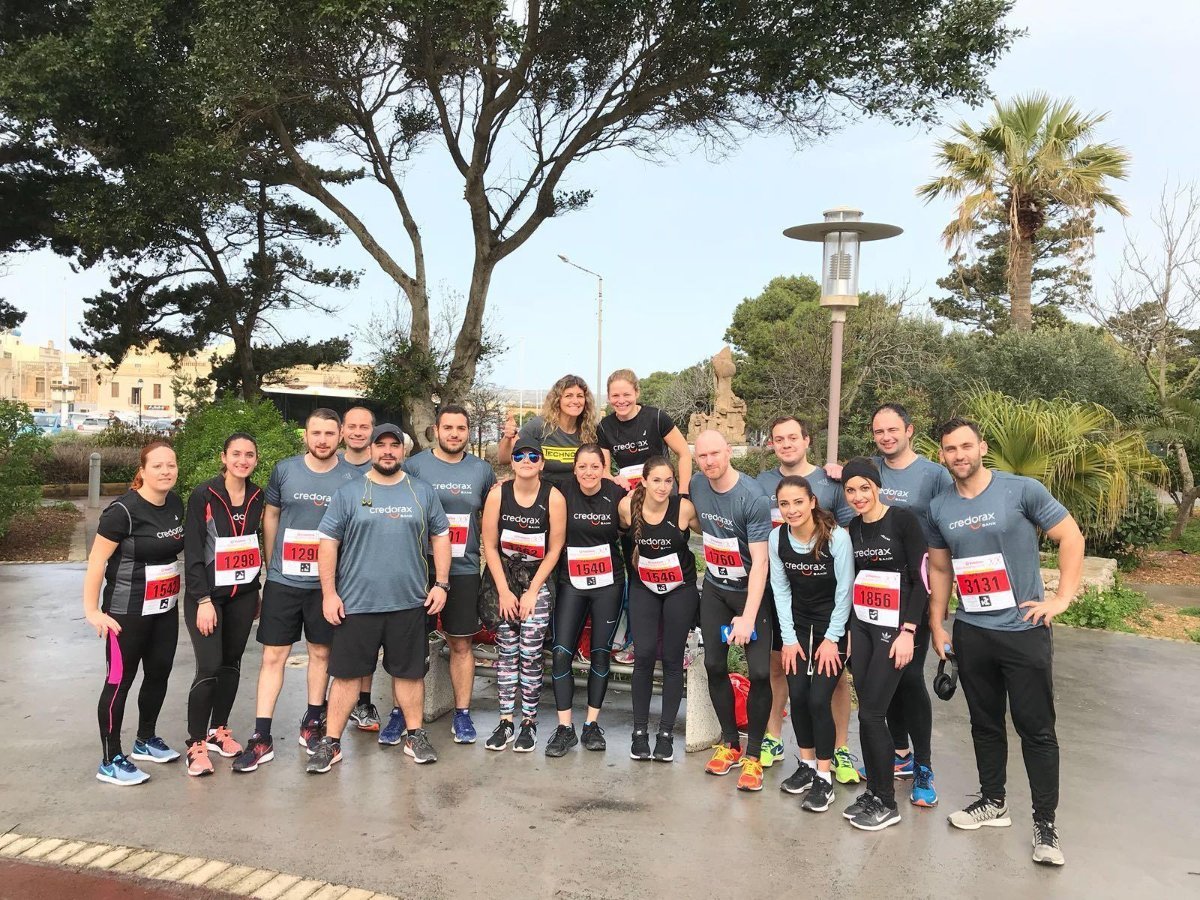 “While I have always been physically active I had never run more than 1km so the thought of running a half-marathon with only three months preparation seemed impossible, but I committed myself to trying to run at least half of the way.  With the training plan devised by Deirdre, our trainer from Up Academy, everyone in my team was able to make incredible progress in a short amount of time.  On marathon day I was able to run the entire 21.1km without stopping, which is something I never thought I would be capable of achieving.  I was immensely proud of what I and everyone else in my team accomplished and I thank Deirdre and Up Academy for helping us prepare both physically and mentally for the challenge. Thanks”

We love success stories ! In November 2017 the HR team from Credorax Malta approached UP! to help them kick off their corporate wellness project which would enable their team to get fit, healthy and reach a milestone: Run the Malta Half Marathon (which was in less than 3 months!)

Using a combination of motivational talks and workshops Nathan nurtured a performance mindset in the team and successfully motivated a good number of them to take on the challenge !

16 brave Credoraxers embarked on a fitness training program which, in less than 3 months, prepared them to run the Malta Half Marathon which took place on the 25th of February. Under the coaching of the former Olympic athlete Deirdre Farrugia, they focused on building strength, speed and endurance. Running a distance of 21 kms is no easy feat especially if you’ve never ran before, like some of the participants. However, their comradery, dedication, discipline and goal-oriented mindset led them to successfully complete this challenge, which was for most, their first time participating in a marathon.

“Deirdre Farrugia was a pleasure to work with. She managed to push my limits and make me feel that nothing was impossible. She was always on time and always available-even during the unpredictable weather we had over Winter. In fact, she motivated us to get out of bed and train when the weather was miserable. She followed up with us during the week to ensure we were continuing our own training in between sessions and even with an injury she would follow us in her car to keep us going during long runs. I am not a professional runner, but I am happy to say that because of her I managed to complete this Marathon 11 minutes faster that my previous one. Thanks “

Their wellness culture however did not stop at the Marathon:

Credorax have proudly co-sponsored the international offroad triathlon Xterra Malta on Sunday the 15th April, which brought together just under 300 international athletes to compete in this prestigious and tough course around the scenic North-West Coast.

The Credorax team braved a triathlon relay which started with a 1.5km swim in Golden Bay, a 30km challenging mountain bike across Majjistral Park and a 10km cliff-edge trail run across the Riviera Martique Plateau. The route was set in the spectacular surroundings of Ghajn Tuffieha and the Radisson Golden Sands was used as the HQ and finish line.

Two other members of the team challenged themselves to the 5.5km trail run along the same triathlon route, which took place the day before.

Credorax are now preparing another team for The Grid Obstacle Course in June!

Congratulations to the HR Team at Credorax for initiating and facilitating this wellness programme and to the participants for their drive, dedication and focus to succeed. We wish you all the very best in your future challenges !

Wellness is directly linked to performance which can be measured by an increase in productivity, employee retention and business growth…

If you would like to find out how we can contribute towards your corporate wellness programme or if you want your brand to be associated with an international sporting event, get in touch!