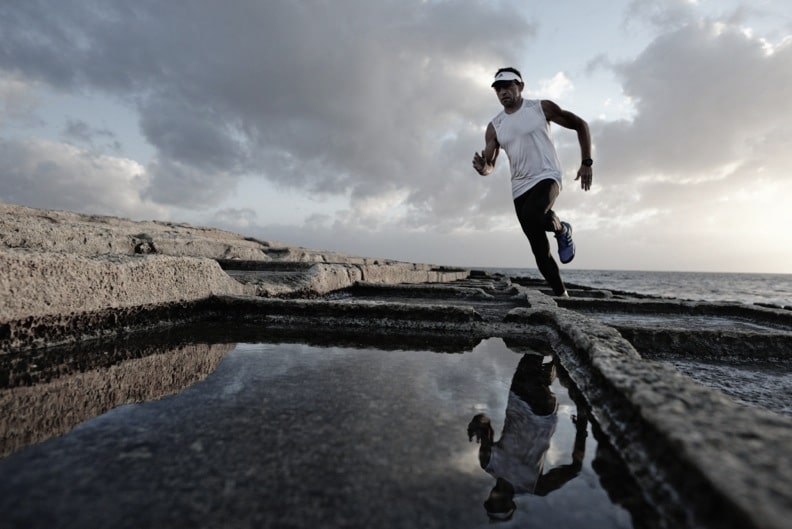 Running for your Life

By Up Your LevelSeptember 11, 2014No Comments

Home » Running for your Life

I think the sport with the most attributed excuses to it is running, so before even getting into how we can teach you to level up your running, whether it is competitive, recreational or therapeutic, here are some interesting points as well as some myths debunked;

Running harms your knees. FALSE. Research clearly shows that runners who transfer weight effectively through their feet, even if they are ‘heel strikers’ do not increase their risk of knee injury and can continue to run well into the third age. “I’m too heavy to run” is also incorrect, as long as running efficiency is addressed and there is no underlying cardiovascular illness. In fact, efficient runners put less stress on their joints than walkers. Unfortunately the supplementation of glucosamine and chondroitin is also unproven, for those that think it is countering any injuries or osteoarthritic symptoms you may be getting. From personal experience, I have torn and repaired my right anterior cruciate twice, have both menisci degraded and have osteochontritis; all this from basketball, which I subsequently was forced to quit. I now run 100-milers for fun. There is only one solution to avoiding knee injuries in running and that is running technique.

You need to run on your forefoot and in ‘minimalist’ shoes to be fast. FALSE. Minimalist shoes were a fad. There is no evidence that low profile running shoes are any better than highly cushioned shoes if you do not factor in gait biomechanics. It is true that cushioned shoes may give the impression that a forceful heel strike is ok if you have a thicker sole, but that is not the point. Forefoot running also bears no significant advantage over those that land on their heel, particularly for longer distance races and those going at a more reasonable (slower than 4min/k pace) speed. The most important consideration is not to over-stride and the transferring your weight through your foot from heel to toe efficiently. If minimalist works for you, that’s absolutely fine.

‘Everybody’ can run a marathon. TRUE. Running a marathon is somewhat natural for Homo Sapiens, and indeed well within our biological ability. As hunter-gatherers, we roamed the savannah chasing our dinners, often running 50km or more every day during hunting season. Genetically, we have not changed since those days; we’re just too sedentary. In 2011 I ran 27 back to back marathons in 27 different countries with little or no rest in between each one, travelling to each and every EU country over that period. I am not an accomplished runner, so I mimicked the approach of our ancestors. Running well within my cardiovascular capability with an emphatic approach to running efficiency. A retraining of our body systems will enable us to return to those days of physical prowess but it is not just about ramping up the running. Our ancestors ran all day from the minute they could walk, so we need to redevelop our sense of movement, efficiency and cardiovascular strength. It takes time, however, bar any illness or contraindications, anyone can run a marathon.

I run, therefor I can eat what I like. FALSE. I am a runner, so I need to be super-strict with what I eat. Also FALSE. Both myths that are also subjective to the individual. Whilst we are burning far more calories than the average when we are training, our body is still influenced by the quality of the food we eat. High quality balanced nutrition will give us more energy whilst the opposite can lead to illness, internal organ malfunction and a drop in energy and performance. On the other hand we do not need to be super strict with what we eat as our bodies are able to extract energy from most quality foods – even fat. Pioneering arctic explorers lived on fat and blubber for months on end with no significant rise in cholesterol or body fat, because they were extremely active. I find that because sticking to a training regime already requires a lot of self discipline in its own right, then perhaps a bit of flexibility in the meal plan will enhance mood and outlook rather than make your plan to run a challenge like the worst idea you’ve ever had!

I need a coach. TRUE. In essence what we advise everyone to do is ‘get it right’ as soon as possible. Don’t wait until you’ve started running, perhaps in the misguided idea that you should first lose weight or get fitter so you’re feel your less embarrassed to join a running club or seek a coach. Bad habits you start off with die hard. Nearly every running injury I see in my physiotherapy clinic is from recreational runners that either decided start running to get in shape willy nilly, or to sign up for a race and have increased their mileage or speed the wrong way, with poor technique, wrong heart rate effort or poor mindset.

You don’t need to sign up to a professional coach and join the team to run a challenge like a half marathon or marathon to get fit or for charity at a recreational pace. But you do need someone to set you off in the right direction. Unfortunately, running technique and efficiency are often omitted by some coaches who are quick to give you a plan with speed and distance targets without any indication of ‘how’ to run. Yes, I really believe that 90% of recreational runners don’t! While it’s great for my clinic’s business, please don’t make the same mistake.

All it takes is is a few sessions to learn how to run efficiently and effectively, with the right breathing, posture and positive outlook. The marvellous side effect is that your life will become better for it!