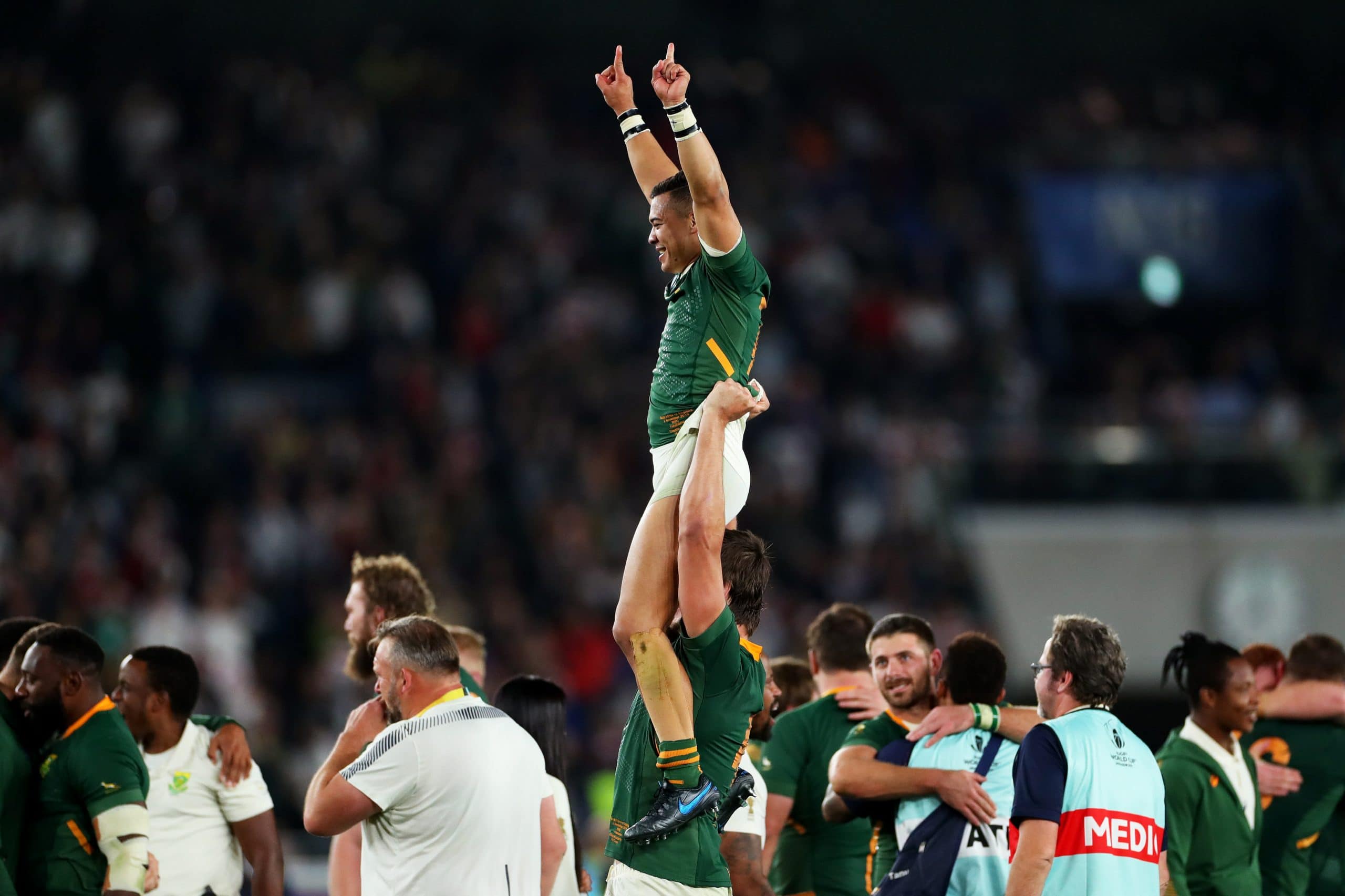 Everybody watching the final of the 1995 Rugby World Cup on the 24th of June being played in Johannesburg’s iconic Ellis Park Stadium, would have felt numb by the image of the first black South African President, wearing the springbok green and gold number 6 jersey of captain Francois Pienaar and raising the Webb Ellis winners trophy together. This was to represent a major shift.

Until then Rugby had, unfortunately, been viewed with little compliment by the black majority population as it represented the dominance of apartheid in the country as a white dominated sport. Until then the Springboks were not allowed to compete in World Rugby competitions, and only after negotiations to end apartheid was South Africa re-admitted to international Rugby in 1992. But on the afternoon of the 24th of June 1995, none of that mattered and in one swift moment of Leadership Genius (some said folly at the time) the late Nelson Mandela swept all previous animosities under the lush green carpet of the field’s grass. Wearing the Springbok jersey as a symbol of unification turned a weakness, a thorn in the side of a country’s history, into a sign of strength and, more importantly, UNITY.

Unity became the value and main purpose at the centre of Mandela’s Presidency.

Since then, the number 6 jersey became as iconic in South African Rugby as the number 10 jersey for football in Brazil and Argentina. It represents the transformation of dreams into reality and has immortalised the value attributed to that single gesture, to that jersey!

Fast forward 24 years and that same jersey was worn by the first black South African Springbok captain to lift the Rugby World Cup trophy on Saturday 2nd November 2019. In the captain’s post-match interview, when asked by a journalist whether he ever dreamed of captaining his country to a world cup title he replied, “growing up, I never dreamed of a day like this at all. When I was a kid all I was thinking about was getting my next meal”. He continued by saying that “a lot of us in South Africa just need an opportunity and there are so many untold stories[,] you can never forget where you come from or the people who have helped you get there”.

This is where unity (as a core value) and purpose come together.

The Springboks won not just because of Siya Kolisi’s skill sets, but because together with the vision and leadership of their coach, Rassie Erasmus, ALL team members united in the common purpose. And for some this purpose went beyond ‘just’ winning the Rugby World Cup.

In the team’s efforts to achieve their goal, they also intend to help inspire the country coming together just like in 1995. Acknowledging that their role as sporting champions, goes far beyond the boundaries of the playing field; as leaders in their field, they are champions of what they represent; a ‘rainbow’ team driven by a common sense of value and purpose to achieve their ultimate goal and inspire others to do the same.

The same applies to the way we run our businesses and our relationships.

Longevity comes with impact, and unfortunately this is true for both the good, the bad and the ugly.

The worst businesses and leaders are remembered just as much, and probably more, than the good businesses and champions of inspiration. The underlining storyline though – as painful as it sounds – is the same; both the businesses and leaders with high positive and negative impact are bound by a quintessential level of purpose in what they do. I will not mention names (as it pains me to do so for the bad guys in this story), but the rate of their individual and collective ‘success’ was due to the depth of the purpose they had towards the achievement of their objectives, and the value of their efforts towards to ‘greater cause’.

Why is it that in the military the members of a platoon refer to themselves as brothers and sisters, while at work we call each other colleagues?

There is a lot to learn from the organisational set-up of the military in the way that outcome is purely and solely dependent on how deeply committed they are to the cause, and by default, to each other. Effort is, therefore, engaged fully to ‘the reason why they get out of bed in the morning’ and fully understand their purpose; to make sure that all brothers and sisters walk away together from a battle as they walked in.

How many ‘fairy tale’ stories of smaller teams, under-rated competitors, newly-established start-ups do we hear of who leave ripples in their wake when they beat a top-flight opponent or disrupt a market?

Unfortunately, we attribute this success to the perfection of the shot, exactness of the calculation, novelty of the product or service. While this is undoubtedly true, it is not the full reason for the success.

To paraphrase Simon Sinek (international best selling author of ‘Start With Why’ and ‘The Infinite Game’), the product, the service one offers is just a mere tool, a tangible representation of something much more important; the purpose. All great success stems from the greater understanding of ‘why’ we are engaged in an activity, sport, relationship or job. According to Sinek, the output is only as relevant as the conviction of the inputs. Like with Siya Kolisi, Rassie Erasmus and the 2019 Rugby World Cup winning Springbok team, the ability to inspire led the team to ‘give it all’ and achieve the ‘one goal’.

As leaders (no matter whether in a business a sports team, a family or even a group of friends), what defines our success and our legacy is not the quality of our product, but the belief in and quality of the purpose with which we engage those around us. Leadership is about inspiring people to find their own inspiration, and inspiration is value driven.

Organisations wishing to inspire need to be value driven.

At the core of those values should be the communal wellbeing of its people, because without people, there would be no business. I was appalled at the comments by a leader of a local business organisation who said that ‘training and development of staff is a cost that could be better utilised to grow the business’. I’m afraid this person understands very little of how business works. Thankfully this person’s peers knew better; Business is about people!

Are you the inspirational leader you would have wanted to lead you?

I would like you to share your thoughts with me on value-driven leadership and organisations by leaving a comment below or e-mailing me on [email protected].